Today I found myself once again trying to be more efficient with my keystrokes and mouse movements and it got me wondering. If I am in a folder, can I open up a Windows Terminal from that folder?

First of all, let me tell you what Windows Terminal is - basically, its Windows Command Prompt on steroids.

Official description is: "The Windows Terminal is a modern, fast, efficient, powerful, and productive terminal application for users of command-line tools and shells like Command Prompt, PowerShell, and WSL. Its main features include multiple tabs, panes, Unicode and UTF-8 character support, a GPU accelerated text rendering engine, and custom themes, styles, and configurations."

It's also open source so you can play around with it and really customise things if you wants.

I know that if I type 'cmd' in to the explorer path area it will load up the command prompt.

What I didn't realise was if I type in 'wt' it will load up a new instance of Windows Terminal. However, this just opens up a new Terminal but you still need to navigate to the folder you were in via the command line. That's not really any saving in time.

After a bit of googling, what I found was, you can edit the settings for Windows Terminal.

If you open up Setting via the dropdown menu in your Windows Terminal....

Then you need to add the "startingDirectory": "."to each of the profiles within the settings.json file. 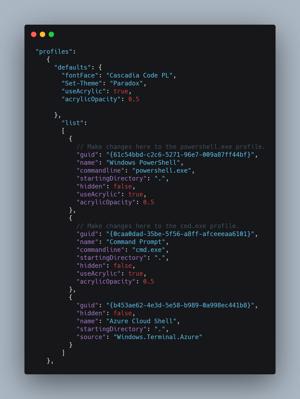 Now when you save this file, and go back to Explorer and type in wt, your terminal window will load and direct you to the folder path that you were originally in.

I also decided to add a bit of transparency to the Windows Terminal by adding the two additional values - "useAcrylic": true and "acrylicOpacity": 0.5you can obviously change the 0.5 to any value you like to make the transparency work better for you. One thing to look out for though, if you don't have transparceny effect turned on in your Windows settings, it doesn't matter what you do in the settings.json file, your terminal won't show any difference.

To turn transparency on, go to Start Menu -> Settings -> Personalisation -> Colours and then toggle the Transparency Effects to On.

Now load up a terminal and it should have a transparent background, you can even put an image there instead and have a different image for different terminal windows. Check out the official documentation for all your options - go wild!