Humbled by the Umbraco Community

The best community I could ever be part of.

During Umbraco's conference - Codegarden, I decided that since I couldn't attend in person this year, I would combine my love of Lego and the Umbraco community and create a Lego version of Codegarden. This idea became what was known as "The Secret Stage".

Then while out on a run, I had an idea on how I could include more people in taking part, a simple idea of asking people to send Lego minifigures to me and I would post photos of them attending The Secret Stage. An idea I thought maybe one or two people would take part in but in the end, over 40 individuals took part! It was incredible and the postman must have been wondering what was going on!

I spun up a quick website and bought a domain https://thesecretstage.vip and the rest, as they say is history.

I loved creating the story on the days running up to and including Codegarden and it seems the Umbraco Community enjoyed it to, which was the main aim. I wasn't the only one unable to attend Codegarden this year but The Secret Stage allowed individuals to be part of the event.
Not only did I post updates on Twitter and the website but Umbraco even included a live stream of my tweets at the Codegarden venue!

This leads me to the reason for this blog.

A couple of days after Codegarden had finished, I was contacted by Warren via Twitter to say that Kim and others at HQ wanted to thank me for creating The Secret Stage and wished to send me a Lego Store voucher! It was completely unnecessary and I was very surprised.

Then, a couple of days later Paul dropped me a similar message but this time it was a thank you from the Umbraco Community. I was blown away with the amount of money he had gathered from a number of Umbraco Community members and to be honest, I am still in shock.

The Secret Stage was done as a bit of fun, never done with the hope or even the thought that I may get something back from it other than a lot of smiling faces.

This blog is a massive thank you to Umbraco HQ and everyone within the community who made a donation.

I was given the option on what to spend the community money on and although it could be useful to pay for travel expenses to get me to CG next year, I felt I'd prefer to have something to look at in years to come so, it will come as no surprise that I've decided to upgrade the Lego city I currently have in my office. 😄 Some new buildings will be getting bought and built very soon and I'll post updates on my Lego instagram account - The_Wee_Dev 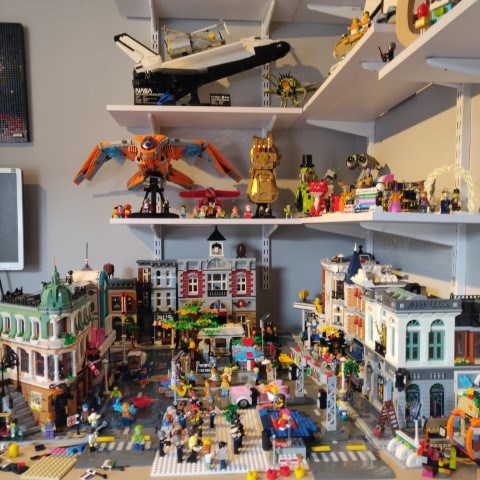 Thank you once again every one of you. I love you all and I will give you a massive H5YR the next time I see you. It's the least I can do!

Paul has shared all your names with me and I'm currently trying to drop you all a message :) It might take me a bit of time but I promise, I will get to you.

Photo by Nicola Fioravanti on Unsplash